Sorry I haven’t had a chance to post these pics before now, but I’ve had another mad week in the office, so this is my first opportunity.

I joined the queue for Hugglets to get in at about 8:30 on Sunday, not early enough to be at the front of the queue, but I was #4, and did get a chair to sit on at least!  It was a little bracing, but I had my nice snuggly furry jacket and a friendly neighbour to chat with while I waited.

When the doors opened I made a bee-line for the Silly Bears stall. I’d fallen for 2 bears they would be exhibiting, one by Jenny Johnson and the other by Linda Down.  Having spoken to Julieann, the owner and manager of Silly Bears, via e-mail during the week, I’d established two things – one, that she operated a first come, first served policy rather than reservations (which was good for me, as I’d have been far too late otherwise!), and the other that there had been others interested in both bears.  She laughed when I appeared at the stand, as I don’t think some of the exhibitors realised the doors had opened, and were still setting up!  I got to pick both bears up for a hug before I handed over their adoption fees and they parked themselves very patiently in bags behind the stall waiting for me to come and retrieve them at the end of the day. 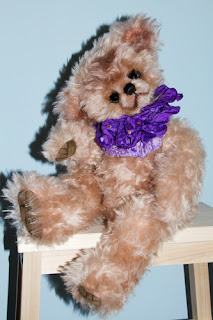 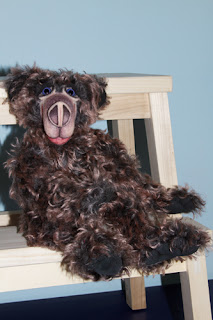 When I turned round, I was absolutely stunned to see that the entire hall behind me had just filled with people, so I made my next stop a dive towards the basement to put my coat into the coat check, and then headed up to see Ginger Brame at the Piece Parade stand upstairs. I was so hoping to get one of her fairy bears, and I managed not only that, but Jack, brother to the mischeivous Sebastian, star of her blog, managed to leap into my hand as well!  I just had to hope they wouldn’t get up to anything in the bag together!  It was lovely to meet Ginger after commenting on each others blogs for so long, and I just drooled over her lovely little set pieces – had I anywhere to have displayed on, I’d have snapped one right up! 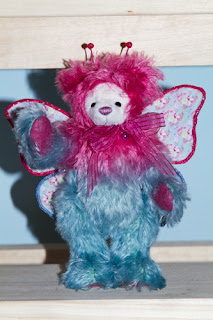 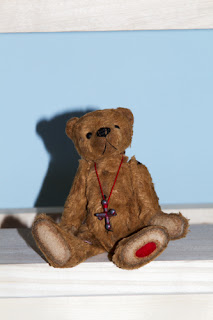 My next stop was to head down to see Ann-Marie at the Bear Me Too stand to see if I could get one of her lovely fuzzy belly bunnies, and I was lucky to be able to get Kalle to add to my growing collection. It was nice to chat to her too as her mum popped back and forth from Norbeary fabrics with possible new bear and bunny materials. 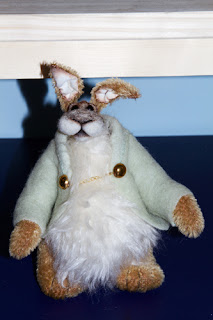 At this point I phoned my friend Karon from TT that I was meeting there and told her I’d done my mad rush, and that the rest of my time and money would be going on whatever leapt into my arms as I browsed with her!  It took a couple of attempts to get to her as it turns out that the stairs at either side of the stage don’t actually go down to the basement!

We headed back down to the basement to browse and chat.  Poor Karon soon found out that I looooove to talk… She lost me a couple of times, and then gave up on trying to drag me along with her!  It was lovely to meet so many people, and I’m sorry I missed a few. I think it was because some bits were just jammed and I thought I’d make it back round there. I’m sure I did do an entire circuit eventually, but I must have missed a couple of stalls anyway :o(

The next bear that leapt into my arms was Cuthbert Crumb at the Dusty Attic Bears stall.  Chloe had a fabulous collection of funky bears, and his big belly, shaggy fringe and sparkly nose really appealed.  Cuthbert, poor bear, found the rest of his trip round the fair marked by journeys in and out of his bag over and over again as people appreciated him and gave him a hug 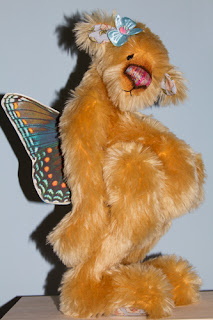 Meandering on there were a number of other bears I liked, but I kept browsing on.  There are a number of artists whose work I would love to adopt one day, so I hope they’re all there next time!  I got chatting to more people, and rather gratefully surrendered my camera to the care of Lynn Bowie at the Madabout Bears stand, so I didn’t concuss anyone else with the bag (and no, I didn’t take a single pic of the fair, I’m sorry).

My final acquisition was the lovely Nanuke at the Doodlebears stall.  I think Jane knew the minute I picked him up that he wasn’t going back down again ;o)  It was at this point that her dear daughter Sarah discovered that the bags she thought were really big, were really quite small to try and fit a large polar bear into :oD  Her son was more distracted with the highly colourful money that the various banks in Scotland had come up with! 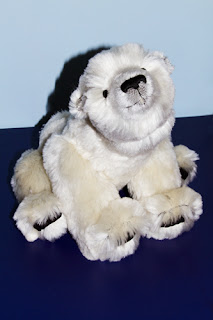 Having made my beary purchases, I also had some materials of my own to buy. I got some absolutely lovely alpaca from The Teddy Bear Shop of Japan, including some in natural black. I see some pandas in my future ;o)  I then picked up my pre-order from Susan at Bear Basics, and got some mohair and paw pad materials from there too.

Having picked up my bags from Silly Bears, I found Karon all over again (I think it’d been 3 hours by this point since we’d seen each other last) and very gratefully, if not a little sadly, I handed over all my new bears to Lynn to chauffeur home for me.  We were reunited again on Wednesday after she braved Glasgow rush hour to come and meet me outside my office, and the bears have been settling in since :o) 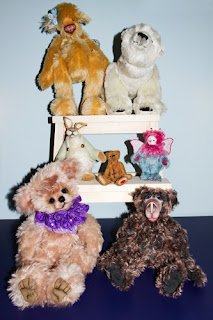