I like to spread my randomness around, but this week’s random is entirely dedicated to my granny, Eva, and the things I learned about her rather diverse life at her funeral last week:

1. After leaving school, she headed off into the big bad world of the Royal Victoria Hospital in Belfast to become a nurse, which was probably quite the culture shock for the country girl from Strabane, even if she did have her big sister there!  Anyway, she was still able to diagnose any ailment 70 years down the line ;o)

2. She didn’t have to worry about hanging around changing bed pans for too long though, because my grandad came along and rescued her, and swept her off her feet to the Isle Of Mann, where he was posted as a post office engineer.  At the start of WW2, he was moved to Liverpool, where granny became the first female post office engineer (it was a logical career progression don’t you know) although getting pregnant with my Uncle shortly after rather put paid to that profession too!

3. Still, nothing daunted, 3 children later, and living back in Belfast after the end of the war found her on the radio on a children’s program singing and reading stories, sometimes accompanied at the BBC studios by my 5 year old aunt, who sang along and read poems (that would be another logical career progression)

4. After my dad came along, there was time to fit in another little sideline, modelling for shops and fashions shows, although I suspect Belfast didn’t have quite the catwalks of Paris…

5. Never wanting to be bored, she was also the captain of the ladies golf club in Holywood: 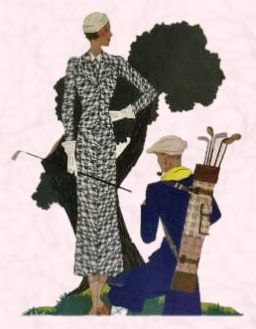 6. In her later years, after grandad had retired and they had moved over to the Lake District, she took to helping out at the local senior citizens club, helping out the ‘old dears’, a number of whom were younger than she was!

In her lifetime, as well as many diverse careers, she raised 4 children, and had 7 grandchildren and 8 great grandchildren.  She had a wicked sense of humour, and there was always something of a challenge to find her a rude birthday card come that time of the year!  She was a truly terrible driver (ask me some time about her merge onto the M6 at Lancaster at the bottom of a very long hill), collected more kitchenware than she would have needed over the course of several lifetimes, and hoarded more memorabilia than anyone I know (except perhaps me, maybe these things run in families…)  She also carefully hoarded everything I ever made her, and spent her last days under the quilt I made in Sarah’s Stained QAL last year: So long granny, we’ll miss you!