The French traffic edition this week.

1.  I was more than a little amused to note that the French like to hand out lectures on their road signs as well, although they tend more towards the mathematical equation approach:

There was also a mysterious one about ‘wild rubbish’, which I shall leave you to work out, but it was also dangerous ;o)

2.  The French in the north of the country don’t appear to suffer from MLDA or OLDA, returning neatly to the slow lane after each pass, but the Belgians, Dutch and Germans obviously are fans, given how many of them were clogging up the Autoroute Du Soleil.

3. Did you know the motorways have variable speed limits depending on the weather?  110 if it’s raining, and 130 at all other times.  Probably a good job we don’t have that in the UK, we’d never hit the 130… 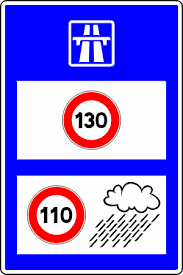 4.  Useful things to note, if you’re on a moped, the No Entry signs don’t really mean it, just feel free to go wherever you like!