Ahh, it’s that time of the week again for wild and wacky random facts I’ve discovered all over t’interwebs.  In honour of the fact that I was gallivanting around last week, this week is dedicated to a collection of all French gems…

1. Did you know that to the Parisians, the Champs Elysees has become a kind of horrific mash up of the Blackpool Illuminations and Kensington?  With high powered ‘dream on board’ cars, such as Lamborghinis, parked at one end (available for a €90 spin around the block), shops with eye-watering prices, streets off it filled with nightclubs populated with footballers and drug lords, and heaving crowds of people who are anything but French, the locals have deserted it, other than maybe to go and see the lights on occasion.  Hmm, the photos I found had rather moved past the 1950’s images of cafes beneath the plane trees and the elegant French ladies right enough!

2. I have found where they’ve gone though, in the last year 1 1/2 miles of the old Seine quaysides on the left bank have been reclaimed from the notorious local drivers entirely for pedestrians and fun seekers, entitled Les Nouvelles Berges De La Seine.  There are blackboards to draw on, floating gardens, a perspex bubble, and a “sound shower” utilising one of the bridge acoustics.  You can fish, zumba, or jive on a boat at the Quai d’Orsay, and if all that activity leaves you cold, you could always sit on the river bank with a friend and have a picnic.  You could even pop over to the other side and sit on a beach!

3. Speaking of the Seine, did you know that that’s where Resuci-Annie came from?  Anyone that’s done a CPR/First Aid course has probably met Annie, but she was actually a real person at one point that could have done with a little CPR herself!  Back in the 19th century it was common to create masks, busts and statues, and in the 1870s a young woman was found drowned in the Seine.  The pathologist that was working at the time was so enamoured of her beautiful facial expression that he commissioned a plaster cast of it from a local moulders.  Although no-one knew who she was, the mask soon started to sell, becoming a muse for artists, novelists and poets.  Fast forward to the late 1950s, and Asmund Laerdal, a Norwegian toy maker, was asked to create a dummy to be used for the newly devised CPR technique.  Deciding that the dummy ought to have a proper woman’s face, and remembering a mask on his grandparent’s wall, he chose the mask of the Iconnue, the unknown woman of the Seine. 4. Moving away from the big city, fear must be growing among the vineyards of France, as well as around the world as global demand for wine exceeded supply by 300 million cases this year!  Ongoing poor weather and vine pull has been blamed for European shortfalls, with production falling by 10% this last year, and by 25% since a world production peak in 2004.  Stock up now while you can folks before demand drives the prices up!  (It’s okay dad, I think you’re safe ;o) )

5. Finally, have you heard of Serge Le Llama?  Not to be confused with the French singer Serge Lama, the poor guy was busted out of a circus by a group of nightclub revellers who took him on a tram in Bordeaux.  He was returned shortly after, and unharmed, to the circus from whence he came.  A French TV show that subsequently tried to interview Serge was met with a ‘No comment’, or whatever it is that llamas do, but he did deign to open the Bordeaux-Nantes football game shortly after the event… 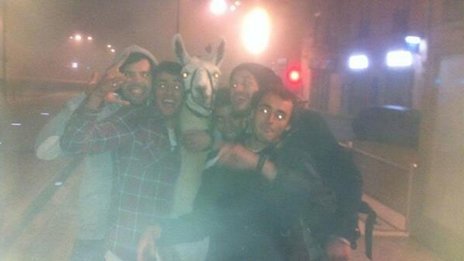