You may have noticed a random silence for the last month while our hostess with the mostess took her summer holidays, but we’re back, just in time for me to give you a random selection of Commonwealth Games facts :o)

1. Did you know that over 50,000 people applied to be Clydesiders, the volunteers who would be helping out at the Games.  Of the 50,000 there were 25,000 interviews and 15,000 were given jobs which ranged from back of house to field of play to front of house.  I was in the biggest team of all, Spectator Services, leading a team each day at Tollcross pool for the swimming.  Best team ever, fact, we won the Bright Star award twice during our 6 days of competition!

As a team leader I rotated in a strict pattern so that I spent 2 days outside the gates directing people in, 2 days within the gates showing people where to go on the way in and out, and 2 days inside the centre, although I didn’t actually see more than a few minutes of swimming each day as I was busy running around after my team.  I got a different group of people each day, some I saw more than once, and others passed like ships in the night (they were also rotating, but on a far more random basis)

This is most of the morning shift, with the exception of the stewards and security staff (who were contractors rather than volunteers)  Jack and I are both in there BTW ;o) 2. More than 50,000 stuffed Clydes were sold.  Clyde was the mascot of the Games, designed by an 11 year old primary school pupil from the city who won a competition.  Here’s Jack with some of the Clyde statues:

3. Selfies are all the rage, and the stadiums were full of people taking them, from the spectators to the athletes.  There were a few photobombers too:

4. Speaking of selfies, Sir Chris Hoy was challenged by security trying to get into his own velodrome (no badge clearly visible, no entry), but there was no-one that stopped the guy that leapt into his cab at the traffic lights outside to grab a cheeky selfie before hopping back out again… 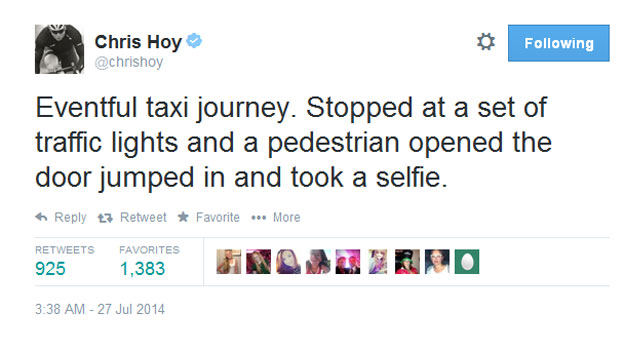 5. And finally, to the medals for the home nations:

Apparently Glasgow cheered very well for them all (and danced, and sang, and ‘Weegie waved’, and… well let’s just say there were kiss-cams at the venues ;o) )

Now my city is in clean up mode, and apparently soon I’ll be able to drive across to my local Tesco for the first time in 3 weeks!